Proposals for a Railway

West Somerset Railway
Notice
A Meeting will be held at the Egremont Hotel at Williton, Somerset on Wednesday 9th July 1856 at 11 o'clock in the forenoon, for the purposes of promoting a Railway connecting Williton and the West Somerset Mineral District with the Bristol & Exeter Railway
Sir P.F.P Acland Bt

The editorial of the Taunton Courier of 2 July 1856, made some supportive comments about the detail of the advertisement, claiming that the area contained "a rare and valuable white carbonate ore...sought after by Midlands industry...".

The Taunton Courier of 6th August 1856 offers a detailed account of the meeting at the Egremont Hotel, Williton. A précis of that report follows - please note the original spellings of placenames has been preserved at appropriate points, such as Donniford (now Doniford) and Bridgewater (now Bridgwater):

The Chairman, Sir Peregrine Fuller Palmer Acland, Bt., outlined the purpose of the meeting was to consider the building of a "Railway from the West Somerset iron-fields and coast, to the Bristol & Exeter Railway."

The Rev. J. Llewellyn, of Wiveliscombe, suggested a route leaving the WSMR at Washford through Monksilver, Elworthy, Brompton Regis, Ford, Milverton and Hillfarrance, and the B & ER.

In a letter to the meeting, the name "Taunton & Watchet Railway" was proposed. (This name was a long time a-dying. In a bid to rally Taunton folk to the cause, the local papers were calling for the railway to be called "Taunton & Watchet Direct" in 3rd November 1856)

The Chairman then talked of the "Quantock Tunnel" route, with a tunnel, over a mile in length, and costing £100,000, would take the line through the Quantocks, which "...are red sandstone..". Making reference to the similarity of the geology of South Wales, and with typical Victorian enterprising optimism, he considered that "...under the Quantock Hills... may find coal...".

Isambard Kingdom Brunel was present at the meeting and had much to say. He had obviously already had a preliminary look at the area, and described the valley of "a little brook called Donniford Brook " as being of prime importance to any route. Brunel thought the intention of the meeting was to "connect by Railway, some point on the coast at Watchet or Minehead, with the Bristol & Exeter Railway at either Bridgewater or Taunton". He went on to give his opinion was for either Watchet or Porlock to Bridgwater, or maybe Taunton. From Williton, the route would follow "the Donniford valley to Crowcombe, then to Triscombe and a tunnel through the Quantock Hills, or to Taunton or direct to Bridgewater". This last option would have taken the route around the northern end of the hills. The tunnel, he went on, would be 70 to 80 chains in length, require many shafts to be sunk, and would be very expensive, and a gradient of 1 in 50 on the approaches. Brunel concluded by favouring the Watchet to Taunton option which had "better passenger potential than Watchet to Bridgewater" and there was little difficulty about ornamental property except at Combe Florey and Bishops Lydeard. A direct line to Watchet, rather than link with the Mineral Railway, was also preferred.

The Chairman announced that Watchet will be the terminus, and it seems that Brunel's proposal was then agreed upon.

Brunel, who had clearly looked over the possible routes, favoured a line from "Watchet or Porlock, to Bridgwater or maybe Taunton...", from Williton "...up the Donniford Valley to Crowcombe, then to Triscombe and a tunnel under the Quantock Hills..." and so on, via Plainsfield to Bridgwater. The Quantock tunnel would be "...70-80 chains...many shafts to be sunk...very expensive". He favoured the Watchet to Taunton option, which would have "...better passenger potential than Watchet to Bridgwater..."

A rival meeting was held on 26 July 1856 at the Guildhall in Taunton. A local land surveyor, William Easton, proposed an alternative route, running from Norton to Wick Farm, up the valley to Ash [Priors] Common, then Denbury Bottom to "the eighth milestone near Friendship Inn", and on to Crowcombe Heathfield and the Doniford Valley.

A station at Ash [Priors] Common was claimed to be convenient for Milverton, Wiveliscombe, Halse and Fitzhead (no mention of Bishops Lydeard!).

Meanwhile, the "Acland" group pressed on. Brunel had the line surveyed in detail and plans drawn up with great speed, as these were deposited with the Clerk of the Peace in Taunton at "4.30 in the afternoon of 29 November 1856".

A prospectus was issued by the new Company, with Sir Peregrine Palmer Fuller Acland Bt of Fairfield, Somerset in the Chair and Isambard Kingdom Brunel as Engineer. Iron ore for South Wales, with household coal for Taunton being the expected cargo, and "passenger communication with South Wales".

The hoped for flood of subscriptions failed to materialise. At a public meeting on 9th February 1859, it was said that "landowners and others in the neighbourhood had not yet shown interest" and that "£1000 had been raised locally".

Two weeks later, the B & ER reported "West Somerset Railway building commencement postponed" but by 7th April 1859, the Cutting of the First Sod took place at Crowcombe Heathfield. Furness of London had been contracted to build the line just two days earlier.

Construction began on 10th April 1859 at Woolston Moor, and by July, three cargoes of railway plant were landed at Watchet, with 200 men employed along the route, increasing to 300 by October.

There were several projects in the Railway Mania for railway construction in the West Somerset area. None passed the planning stage, but it is worth looking at the proposals, as they have some relevance to the final picture. The original spellings of placenames has been preserved at appropriate points, such as Donniford (now Doniford) and Bridgewater (now Bridgwater).

The "Bristol & English Channels Direct Junction Railway" (B & ECDJR), 1845, was one of many speculative proposals for a "Channel to Channel" route, a popular idea at the time for an alternative to the hazardous and lengthy sea journey around Cornwall.

From Bridport Harbour in Dorset, the proposed route made for Taunton, and appeared to join the Bristol & Exeter (B & ER) near to the later Chard branch junction at Creech, sharing the metals through the station, before striking northwest, through Pickney to Nethercott, thence following the present line to Williton. The approach to Watchet was to be direct - up Liddimore Lane, over the low hill and down to the harbour more or less along Goviers Lane. There were to be branches to Wiveliscombe and Crewkerne.

Another 1845 proposal was the grandly titled "Somerset & North Devon Junction Railway & Porlock Harbour & Docks" (S & NDJR & PH & D). This was to run from a triangular junction with the proposed B & ECDJR under Castle Hill, near Sampford Brett, to Porlock. Notable features were to be a 407yd tunnel under Cleeve Hill, near Bye Farm; a new sea wall and land reclamation at Minehead; a very scenic cliffside section around North Hill and Selworthy Beacon via Culver Cliff and Greenaleigh, culminating in a 667yd tunnel through Hurlstone Point; and a run along the shingle bank at Bossington terminating at the proposed enlarged harbour and docks at Porlock Weir.

Yet another from the Mania was the "Bridgwater & Minehead Railway" (B & MR), a more modest affair, although crossing the Quantock headlands at Doniford, St Audries and East Quantoxhead involved gradients of 1 in 73 and 1 in 68. The remainder of the route from Doniford to Minehead passed to the north of Williton, near to the present school, then to the north of Washford Cross, before following a similar alignment to the later Minehead Railway, except that it passed Blue Anchor to the south of Marshwood Farm. A branch to Watchet was planned from Williton, interestingly with direct access from the Minehead direction. The entry to Watchet was again to be via Liddimore Lane, rather than the clifftop route of the present line. As with the S & NDJR & PH & D, a new sea wall was envisaged across the shore at Minehead to carry the line to the terminus at the harbour.

The first railway in the area was the West Somerset Mineral Railway (WSMR), approved in the mid 1850s to construct a "narrow" (as opposed to "broad") gauge line from the iron-ore mines high on the Brendon Hills to the harbour at Watchet. This Company, with an eye on the opposition, soon proposed a extension, or more correctly, a branch, from its proposed alignment at Washford, to the harbour at Minehead. The line would have run north of Washford, south of Bilbrook, then to Marshwood Farm and Ker Moor, across the Dunster Marshes, and along the present Esplanade and Quay Street. This would have provided two possible seaward outlets for the mineral traffic. 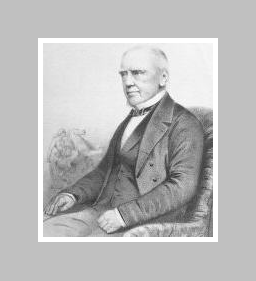 It was Sir Peregrine Fuller Palmer Acland Bt who placed the advertisement in the Taunton Courier's edition on 2 July 1856 and then chaired the meeting at the Egremont Hotel at Williton, Somerset on Wednesday 9th July 1856 at "11 o'clock in the forenoon with a view to promoting the building of a Railway from Watchet to connect with the expanding railway network."

In the event, the meeting led to the formation of the first West Somerset Railway Company, and later, to the building and opening of the line from the Bristol and Exeter Railway at Norton Junction, just west of Taunton, to the harbour town of Watchet.

More about the man...

The following notes are courtesy of Lady Gass, Her Majesty's Lord Lieutenant of Somerset:

Sir Peregrine Fuller Palmer Acland Bt (1789 to 1871) married Fanny Leader (1797 to 1844). They lived at Fairfield at Stogursey near Bridgwater, Somerset, just as his ancestors had for hundreds of years before.

He was very active in Somerset, building several village schools and rebuilding St Audries Church at West Quantoxhead. He was the founder and first Chairman of the West Somerset Railway (Watchet to Norton Junction).

His wife and their three children all caught TB. Only his eldest daughter, Isabel (1832 to 1903), survived. As a "thank you" offering, Sir Peregrine built Stogursey School. In 1849, Isabel married Sir Alexander Hood Bt (1819 to 1892) in Stogursey Church. They took the joint name of Acland-Hood and lived at St Audries and Fairfield Estates.

Sir Alexander was a member of the well-known Hood naval family, many of whom became Admirals from the time before Nelson, until the First World War. The Hood Monument on his estate near Glastonbury is a memorial to one of them, as was the battleship "HMS Hood".

Sir Alexander Acland-Hood Bt was Member of Parliament for West Somerset from 1859 to 1868.

Compiled with the invaluable help of Ted Cubitt of Cannington.